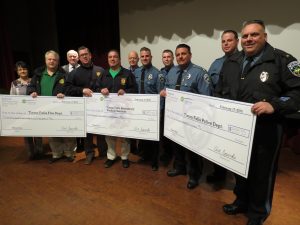 TINTON FALLS, NJ – The Borough of Tinton Falls has an approximate population of 20,000 residents with nearly eight-percent living at the Seabrook retirement community on Essex Rd. Seabrook is well aware of its large population, including nearly 1,000 employees.

Thankfully, the borough recognizes this as well- especially its police, fire and EMS first responders who have been providing emergency assistance to the community for the past 17 years.

The Seabrook community thanked these dedicated heroes by welcoming Mayor Gerald M. Turning, Borough Council President Gary Baldwin, who also resides at Seabrook, and members of the Tinton Falls police, fire and EMS departments. Equal checks were given to each response agency totaling $10,000.

The money was donated by residents and will be earmarked by each department in their ongoing effort to provide emergency response throughout the borough.

The idea to raise funds for Tinton Falls was brought to the Seabrook community by resident Judy Tier earlier this year. Mrs. Tier said that it is incumbent upon residents to support first responders in any way possible since they are so important to the community.

Mayor Turning said, “We are extremely honored and thankful to receive this gift from the great residents of Seabrook who have been such an integral part of our borough for the last 17 years. In addition to our dedicated police officers and EMS responders, we are extremely fortunate to have devoted firefighting volunteers who protect the wellbeing of all our residents. This generous gift will be put to good use as all emergency personnel continue to meet the needs of our community.”

“Seabrook and Tinton Falls have historically had a wonderful relationship,” said Council President Baldwin. “Our seniors here have continually donated their time and talent supporting children in the schools through mentoring, tutoring and by providing employment opportunities for students who work in our restaurants. I am extremely fortunate to be part of the Tinton Falls Borough Council and to call myself a Seabrook resident.”

“All the Tinton Falls first responders are critical to the welfare of the residents here at Seabrook,” said Resident Advisory Council President Bob Gamble. “This donation is our way of thanking the borough’s police, fire, EMS and emergency management employees who work tirelessly to support not only the needs of residents, but our staff and the entire population of Tinton Falls.”

The Borough of Tinton Falls has 41 police officers and commanders, 40 volunteer firefighters and 24 EMS responders, all of which cover the nearly 16 square miles that make up the town.

In addition to the donated checks, large “Thank You” cards were signed by residents and presented to each individual emergency responder unit.

About Seabrook:  Seabrook is one of 18 continuing care retirement communities managed by Erickson Living. The scenic 98 acre campus is located in Tinton Falls, New Jersey and is home to more than 1,400 residents. Seabrook is the perfect greater Monmouth and Ocean County retirement destination offering a true sense of community, convenience beyond compare and a sensible financial structure. 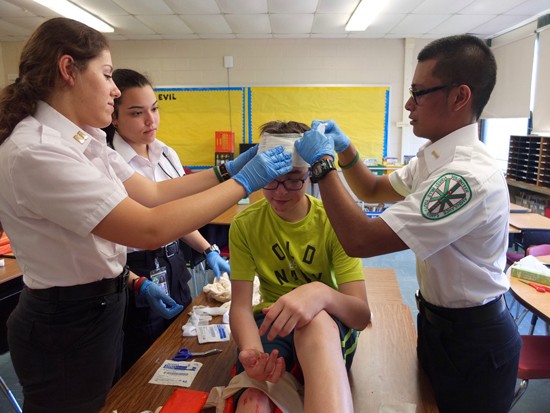 Eighty young future Emergency Medical Service providers from two states turned out for the 3rdAnnual Bayshore Cadet Competition held in Keyport, N.J. on June 11, 2016.
Twenty teams of competitors from EMS organizations from New Jersey and New York participated in the day-long event, which was created by Keyport First Aid Chief Ken Krohe to foster interest in youth EMS programs, and ultimately the future of the emergency medical services field.Krohe, with assistance from professional and volunteer providers managed the event, which featured attendees participating in a series of basic and advanced skills tests.

“Skill levels, a lot of the teams are very, very good. Very good,” Krohe said. “Some of them have really been working.”

Planning for the competition began eight months earlier, said Krohe. Planning included lining up evaluators, who carefully judged the skill levels while also sharing their knowledge. Krohe and his team also coordinated getting a variety of equipment to Keyport High School, where the event played out, including the arrival of two medical helicopters.

In just a year, Krohe says, the number of participants has grown as has the quality of their skills.  “There just seems to be more people and more enthusiasm,” Krohe says.

To keep the younger members interested, the skills competitions range from advanced to very basic, such as performing CPR or measuring a patient’s pulse. Various skills stations were set up inside Keyport High School, with teams rotating throughout the building. Outside, two cars were in place for teams to use extrication tools and to remove injured patients. Also outside, a special ambulance from the Monmouth Ocean Hospital Corporation (MONOC) served as a base for some advance skills.

Krohe said he event is a competition, but also an educational tool.

“I hope they learn from their mistakes. That’s why we have the evaluators pointing out what they have done wrong,” Krohe explained.  “It’s not like an EMT test type of thing, where you walk out of the room wondering how you have done. They’re being corrected if they’ve done something wrong. And shown maybe a better way do something.”

Krohe said he wanted the participants leaving the event having learned a little something and, perhaps, made new friends.

Many volunteer EMS organizations have cadet groups, which are geared toward grooming the next generation of providers. Krohe estimates a third of Keyport First Aid’s roster is made up of former cadets, who graduated to full membership.

Standing between skills stations, Krohe said he was proud of the competition and the turnout of participants.

“It’s great for the kids,” Krohe said. “There’s so much negativity out there now, with kids not doing anything, this that and the other thing.  if you can get a group of kids, and it helps. It does help. There’s so many of my kids going into the medical field just because of cadet programs. So I’m sure it does happen in other squads too.”